What is a corrupt villain in a card game


So what does it mean for the bad guy to bribe in a card game? 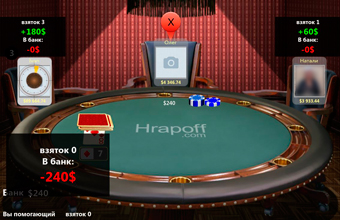 In the game Snore, the rules prescribe to the Snore player to take 2 bribes, and to the helping players-1 bribe. In addition, a bribe commits to take users who refused to play for the Snore player and help the participants in the game and agreed to take "heels" and "six". If the player for any reason took the wrong number of bribes, which was supposed to him, then this phenomenon is called a bribe in a card game or a remiz.

In the case of remiz, the player of the game is liable to a fine or a labet. The size of the labet depends on the number of kickbacks not collected by the player. But the player who still plays (unless he chooses a pass) must report to the general Bank a certain amount of money: if the player who helps or took a "five"/"six" - from his account to the bank is carried as much money as in the bank at the moment. The Snore player has even less chance – he is required to report to the bank the double size of this amount. Those who choose to go to the bank don't make any money.

If the bank was empty, players are exempt from penalties and pay nothing. When the distribution is complete, the right to start the next distribution belongs to the "snored" player.